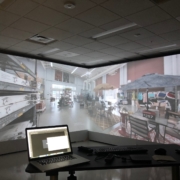 Virtual reality is one of the fastest-growing phenomenons: in 2018 alone it reached $4.8 billion dollars in revenue from both software and hardware. Although traditionally an entertainment technology for use in cinema and video gaming, applications of virtual reality are reaching further than ever before. VR has been used in the medical field to demonstrate procedures to students. In physical rehabilitation, patients visualize their changing bodies and progress. Psychiatrists use the technology to help understand and treat phobic and traumatic disorders, addictions, and neurological disorders such as autism spectrum disorder. Virtual reality has obvious implications in retail such as virtual customer experimentation with novel products, but what is the future of VR in loss prevention?

Employees are the first and most effective line of defense in loss prevention, and the most salient use of virtual reality in retail is in employee training. Walmart gained fame in the market after developing a program integrating virtual reality into its management training centers, called Walmart Academy. They have reported improvements in employee post-training testing of up to 15%, showing a marked increase in information retention over traditional online training modules. These improvements were especially noticeable when educating employees on new procedures, such as using the new Walmart online pickup towers. Now, Walmart is in the process of shipping 17,000 Oculus Go headsets to stores around the country to reach its goal of training over one million associates using virtual reality. This ambitious goal is being met with welcome and excitement by Walmart associates, many of which are looking forward to receiving cutting-edge training. As is one of the great benefits of this technology, Walmart uses virtual reality to create scenarios for employees that would otherwise be difficult or impossible to replicate in-store. One example of this is Walmart’s Black Friday management training, demonstrated in a report by CBS. To replicate the experience of managing a store during the rush of a Black Friday sales event, Walmart used 360° video recordings of a real store on Black Friday to challenge managers to look for real customer safety hazards among the chaos. A Walmart associate described this as an ideal training solution because it allows for total immersion in a real-life scenario, but with the ability to make mistakes and learn without risk.

Verizon, too, is developing new associate training modules using virtual reality. Like Walmart, they are using the technology to train associates for situations they are unable to replicate in real life. Specifically, Verizon is focused on targeting violent loss prevention. Although violent loss prevention incidents occur in fewer than fifty of their stores a year, thousands of managers have been trained in their armed robbery loss prevention course. Verizon Chief Security Officer Michael Mason told CBS that even though armed robberies are far from common, preparing associates to deal with a dangerous situation is a reality of life and that is worth facing if it can help them identify threats and protect themselves more effectively. “Clicking through a computer module is nothing like turning around to a gun in your face,” said Mike Currier, associate director, at the Loss Prevention Research Council’s (LPRC) summer Innovate event. Turning around to a gun in the face is actually a part of the Verizon virtual reality training. Although some Verizon managers described the training as visceral and traumatizing, they said the training helped them practice staying calm in an emergency in order to protect themselves and customers. These are just two examples of virtual reality training in the retail industry. Chipotle is even using virtual reality technology to train new associates, and Jet Blue is using it to familiarize airplane technicians with their jets.

Another mode of virtual immersion is mixed reality systems, such as the Simulation Lab located in the LPRC’s NextRetail Research Center in Gainesville, Florida, made possible by Sensormatic and Nedap. Mixed reality is created using a combination of physical and digital objects in the immersion experience, to better target participant attention and response. For example, focus groups can be virtually immersed in a store using our simulation lab, but can interact physically with real elements in a store such as a self-checkout terminal. Another advantage of this over a traditional virtual reality system is the ability to target focus groups, rather than individuals. In addition, a mixed reality room can be combined with biofeedback systems to allow for an even richer level of data collection that can be done with virtual reality systems. We believe that allowing participants to interact with the environment as well as each other will lead to the best replication of real-world conditions, because loss prevention is never an isolated event or individual interaction; it happens in the context of others. Regardless, virtual reality has both research and employee training possibilities, and will definitely play a part in the future of loss prevention and retail.