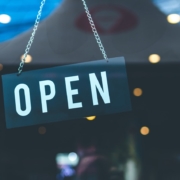 With the holiday season around the corner, retailers are preparing for the influx of traffic at their stores. Shoppers want to snag deals on the newest TVs, cutting-edge phones, and latest laptops. However, the perfect gifts for your friends and family are also prime targets for thieves.

Thieves take advantage of busy storefronts, large crowds, and retailers’ overstretched resources to commit crimes, hoping to go unnoticed. It is no surprise that there is a sharp uptick in shoplifting during the holiday season, resulting in billions of dollars of loss. Thieves focus their attention on popular, easily concealable items, that are difficult to trace, easy to transport and resell. While some shoplifters keep stolen goods for personal use, professional thieves resell these goods to individuals, small businesses, and even other retailers! In recent years, professional thieves have transitioned to selling a large portion of their stolen goods on popular websites such as eBay, Craigslist, and SwipSwap.

While some items, such as electronics, may seem like obvious targets of theft, others may surprise you. Here is a list of the most commonly targeted items by retail thieves based on research by the Loss Prevention Research Council.

High-end Smart Phones and Other Electronics

With the introduction of the iPhone X and the Google Pixel, many consumers will be upgrading their cell phones over the coming year. Where there is high demand, there is the possibility of theft. Apple iPhones and Samsung Galaxy phones have been some of the highest theft items for retailers. While they are often kept behind lock and key, the fact that they range in price from $400 upwards to over $1000 per phone make them enticing targets for retail thieves. Cell phone and electronics accessories are also targeted by thieves. In recent years, Beats and Bose headphones have made the list of most stolen electronics for most retailers.

In-demand fashions are also highly targeted by thieves. These include designer handbags, belts, and clothing. High-end brands such as Ferragamo, Michael Kors, Fendi, and Tori Burch regularly make the list of most-stolen items. These are highly desirable because thieves can often make off with tens, even hundreds of articles, in a single visit. Designer articles can range from $50 to upwards of $2000 per article. Thieves can often sell these to third party resellers or individuals for up to half of the full retail price. Many thieves will brazenly load up a cart with high-end fashion items and simply walk out of a store. Others use foil-lined “magic bags” to defeat electronic sensors. This has become such a large problem that many states are adopting laws that make the possession of such bags punishable offenses.

Athletic footwear has always been in high demand among thieves. While theft rates ebb and flow with fads, particular brands remain highly desirable, including Nike, Air Jordan, and Under Armor. Certain fashions may be popular with thieves because they are worn by a popular sports figure or pop stars, and quickly sold as a result. Because fashion changes quickly, loss prevention professionals need to be able to quickly identify which products will be the targets of theft.

Makeup, anti-aging creams, and other luxury cosmetics are highly sought-after commodities. These items are small, valuable, easy to conceal, and easy to resell on the market. Olay creams, Estée Lauder products, and certain designer colognes are all highly targeted by thieves, who sometimes sell these items online or at flea markets.

Alcoholic products are preferred targets for thieves because they can be easily concealed, and easily sold. “Vice products” such as alcohol and tobacco present special issues for retailers, especially drug stores and convenience stores. These products can sometimes result in violent crime, such as robberies. These items are heavily targeted because thieves understand there is high demand for these items because they are expensive and enjoyable to the people that regularly partake in them. Theft of alcohol can hurt retailers in unforeseen ways. Because alcohol is targeted by thieves, retailers choose to keep alcohol behind a counter or locked display, hurting sales from legitimate customers.

While expensive electronics or designer clothes may be an obvious choice for thieves, due to their high value, thieves often target common household goods such as certain brands of laundry detergent, or baby formula. Because these products are necessities, and can be very expensive, there is a built in illicit market for these products. In a few cases, law enforcement professionals have found that products such as Tide laundry detergent act as a sort of illicit currency for drug deals, given its limited traceability, high value, and a built-in demand. After all, everyone has to do laundry!